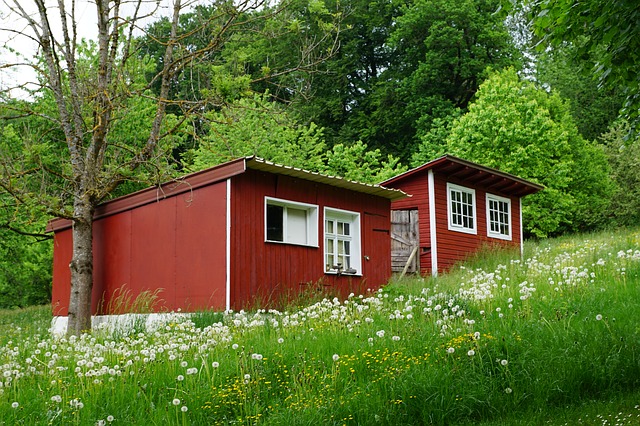 Callie Brauel and Nathan Huening didn’t know what they were getting into when they started building their tiny house and how much of their lives would end up revolving around it and houses like it.

“We kind of fell into it,” Brauel said. “We built it because we didn’t have land and it was kind of like we could either afford land or the tiny house.”

Thanks to our subscribers for supporting local journalism

Building a 160-square-foot house onto a trailer was a lot of work and lessons for “a couple of computer kids,” as Huening called them. But once they had it, finding a place to put it pushed them to start a community of seven tiny houses they call Cranmore Meadows on South N.C. 54, which is a whole way of life and, potentially, a living.

“We’re preserving a lot more farmland and creating affordable housing,” Huening said, “none of which would be possible with a traditional subdivision.”

Design helps overcome limited space. Thirteen-foot ceilings and big windows, like Brauel and Huening have, makes the interior space seem larger. Open cabinets make kitchens feel bigger since there are no big wooden boxes blocking thigs up visually. That also means choosing dishes you like to see, which is part of the whole tiny house aesthetic – having fewer things, so only having things you really like.

Living in houses of 100 to 400 square feet is a movement focused on having fewer possessions, using fewer resources, focusing on the outdoors, affordable housing and building community. The West Coast, of course, is fairly accepting of the whole idea, but in a lot of places, tiny houses don’t get a warm welcome.

North Carolina recognizes three types of houses – stick-built, manufactured and modular. The houses in Cranmore are tiny houses on wheels, or THOW, which are considered recreational vehicles under state code.

“These are basically Winnebagos that are stick-built,” Huening said, “but these are 100-year houses that you can leave to your grandchildren.”

So it’s very hard to find a place to put one of them because most counties in the Triangle and Triad don’t allow RVs to set up long term. While the freedom to move them is part of the attraction of a tiny house, it’s not a camper. One can weigh 8 tons, and moving it is costly and difficult.