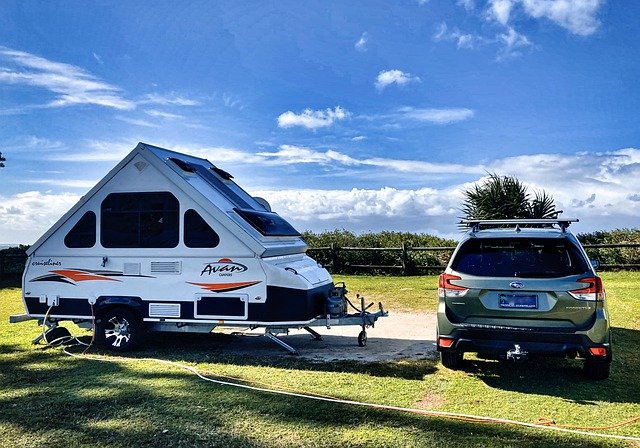 Hundreds of caravans are sitting perilously close to the edge of the cliff in Sandy Bay. (SWNS)

The pictures, captured by Ziggy Austin at Rock Solid Coasteering on Monday, show the huge landslide next to the holiday park in Sandy Bay in Exmouth.

Alarmingly, some caravans appear just metres away from the edge of the cliff.

It follows a number of cliff falls in the area over the last six months.

In a statement on Facebook last year, the local Beer Coastguard Rescue Team said: “Cliff falls this morning, please stay away from the base of cliffs and take note of the signs, they are there for a reason.”

During the summer a number of beach-goers were pictured sitting directly under crumbling cliffs at the same location – despite an enormous sign warning them.

Drone images show the huge landslide next to the caravan park in Sandy Bay in Exmouth, Devon. (SWNS)

There have been a number of cliff falls in the area over the last six months. (SWNS)

The sign, that read ”DANGER – beware of falling rocks” seemed to be ignored by sun-seekers who flocked to the beach as temperatures reached 30C.

Eye-witness Raymond Loade posted on Facebook at the time: “Having seen this every time we go there for the last five or six years I felt it was time to try and get something done as when I usually point out what the notice says, the majority of the replies are unprintable.”

Following the images taken last summer, a spokesperson for East Devon District Council said that the cliffs “pose a very real danger and caution must be exercised when visiting them”.

The pictures were captured by Ziggy Austin at Rock Solid Coasteering on Monday. (SWNS)

They added: ”Rock falls and landslides are unpredictable events, occurring without warning, and can cause serious injury or death.

“Warning signs can be found in areas managed by us.”

Yahoo News UK has contacted the council for a comment on the latest rock fall at Sandy Bay.

Watch: What is a ‘Climatarian’?