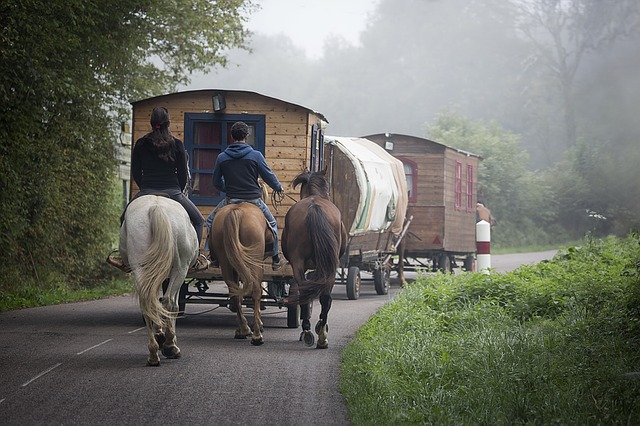 TRAVELLERS trapped locals inside their own homes by barricading a road with 20 caravans and hurling projectiles at cars, residents said.

Residents say they had their Christmases “ruined” after the newcomers blocked the only way in and out of a housing estate with violent scenes prompting RIOT police to turn up.

The travellers set up camp at the site of a disused factory in Worcester, Worcestershire, on December 16 before locking a gate and parking on grass verges so vehicles couldn’t pass.

The metal barrier outside the former Lotus Factory meant locals could either not gain access to or not leave their homes as the street was the only way in and out of the nearby estate.

Residents told how officers had to wait for backup from riot cops before the gate was eventually reopened on Christmas Eve – but the group still remain at the site.

Homeowners claim they have since been verbally abused, had things thrown at their cars, and have seen fights breaking out.

There have also been reports of cars racing up and down the roads, while others have had vehicles “dumped” in front of their homes.

One man, who lives nearby, said shaken locals fear for their safety after 20 caravans descended on the car park of the former site of Lotus Lightweight Structures.

He said: “[The responding officers] had to wait for the riot police as back up before opening the gates on a public road.

“How do you think we local residents feel?

“The gates were locked another couple of times after the police opened them.

“The travellers have simply ignored the order. How can they be allowed to just do that?

“Law abiding citizens are being left to put up with this and suffer.

“We know police have the power to move them on but they’re too scared.

“It is disgusting that this is allowed to continue.”

Since then, residents say they have increased in numbers and spread to the adjoining old gas works, and rubbish is now strewn across the estate.

Angry neighbours also claim loud chainsaws and late night bonfires have kept them up at night.

One resident, who did not want to be named, added: “Many people’s Christmas have been ruined because of these people.

“We won’t leave our homes empty and others have cancelled family and friends coming over.

“We have one way in and one way out, and that’s past this site.”

Cops were called to chaotic scenes in Worcester